Behind Deep Blue: Building the Computer that Defeated the World Chess Champion 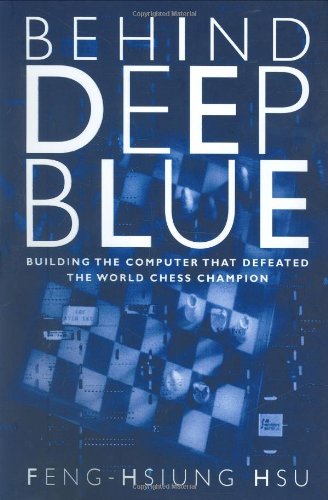 On May 11, 1997, as millions worldwide watched a stunning victory unfold on television, a machine shocked the chess world by defeating the defending world champion, Garry Kasparov. Written by the man who started the adventure, Behind Deep Blue reveals the inside story of what happened behind the scenes at the two historic Deep Blue vs. Kasparov matches. This is also the story behind the quest to create the mother of all chess machines. The book unveils how a modest student project eventually produced a multimillion dollar supercomputer, from the development of the scientific ideas through technical setbacks, rivalry in the race to develop the ultimate chess machine, and wild controversies to the final triumph over the world’s greatest human player.

In nontechnical, conversational prose, Feng-hsiung Hsu, the system architect of Deep Blue, tells us how he and a small team of fellow researchers forged ahead at IBM with a project they’d begun as students at Carnegie Mellon in the mid-1980s: the search for one of the oldest holy grails in artificial intelligence–a machine that could beat any human chess player in a bona fide match. Back in 1949 science had conceived the foundations of modern chess computers but not until almost fifty years later–until Deep Blue–would the quest be realized.

Hsu refutes Kasparov’s controversial claim that only human intervention could have allowed Deep Blue to make its decisive, “uncomputerlike” moves. In riveting detail he describes the heightening tension in this war of brains and nerves, the “smoldering fire” in Kasparov’s eyes. Behind Deep Blue is not just another tale of man versus machine. This fascinating book tells us how man as genius was given an ultimate, unforgettable run for his mind, no, not by the genius of a computer, but of man as toolmaker.

Be the first to review “Behind Deep Blue: Building the Computer that Defeated the World Chess Champion” Cancel reply

Behind Deep Blue: Building the Computer that Defeated the World Chess Champion