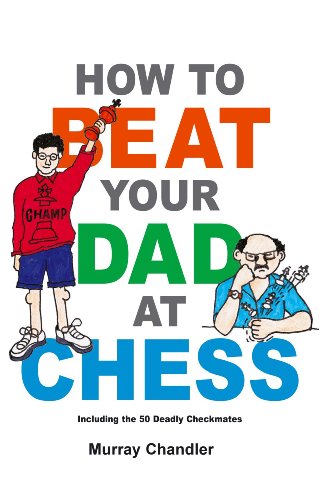 "Fun to read for players of any age or any strength" – Lubosh Kavalek, Washington Post

This is a chess book for everyone, from eight to eighty, beginner to master. In a clear, easy-to-follow format it explains how the best way to beat a stronger opponent (be it a friend, clubmate – or Dad!) is by cleverly forcing checkmate. Delightful and instructive positions from real games are used to show the 50 Deadly Checkmates that chess masters use to win their games.

For the beginner, simply learning the checkmating ideas and enjoying the examples will help develop the tactical skills needed to carry out attacks, combinations and sacrifices.

For the advanced player, many of these checkmating ideas will come as a revelation, having never been categorized before. Experts agree that pattern-recognition is vital to success in chess, and this book provides a wealth of valuable patterns.

How to Beat Your Dad at Chess makes improving easy and fun, and is full of helpful explanations and practical advice on how to approach chess games with confidence – and success.

"Among several good guides to tactical play, my favourite is grandmaster Murray Chandler’s How to Beat Your Dad at Chess" – Leonard Barden, London Evening Standard

Grandmaster Murray Chandler finished second in the World Cadet Championship in 1976, ahead of Garry Kasparov, whom he defeated in their individual game. He remains to this day one of the few players in the world with a 100% score against Kasparov.
He was a key member of the England team that won the silver medals in Chess Olympiads three times during the 1980s, and went on to captain the team in 1994. He is a former proprietor and Editor-in-Chief of the British Chess Magazine and the author of several bestselling chess books.

"A perfect introduction to tactics for the beginner and developing student" – IM John Watson, TWIC

"Don’t let the title fool you; this is a book that almost anyone below the Expert level would benefit greatly from. Chandler has a very clear idea of his audience and I think that almost anybody who studied this book closely would improve his or her tactical vision. I found the book to be extremely well written and a useful addition to my collection. It also would be very beneficial in the instruction of young players, as the examples given in the test positions would probably keep most youngsters engaged for a couple of hours at least" – Bill Whited, Chessville.com