Jaques of London Chess Set with Board Inc. Draughts Pieces – A Chess and Checkers Sets with Board – Perfect Wooden Chess Set for Kids of All Ages – Your Children will Love this Beautiful Set

Added to wishlistRemoved from wishlist 0
Add to compare
£49.95 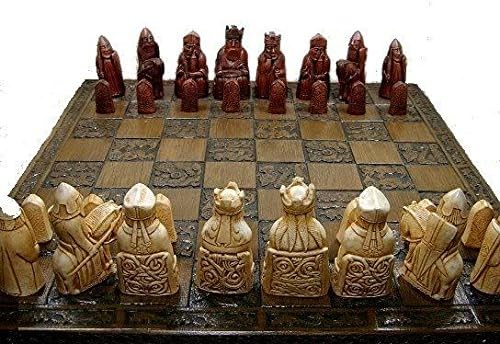 This is a full set and a replica of the isle of lewis chess set pieces. The original set is believed to have been made in the 12th century and was found during the 19th century in the Isle of lewis – scotland. The pieces appear to be made out of resin. They are large and heavy-largest piece being 3.5 inches tall. They will be wrapped individually in bubble wrap and then packaged in a large plain brown cardboard box.

A complete set ( 32 pieces) of full size Isle of lewis chess pieces-IN AN UNUSED PERFECT CONDITION—JUST NOT IN ITS ORIGINAL DISPLAY BOX…
Beautifully detailed-Appears to be made from resin, coloured brown and cream-in reality the white pieces are whiter than the picture suggests as the contrast/darkness of the picture was increased to make the detail stand out.
A replica of the original 12th century isle of lewis chess set, which is identical to the pieces found at the London based British Museum
Pieces only. NO BOARD INCLUDED