Chess for Beginners: Know the Rules, Choose Your Strategy, and Start Winning 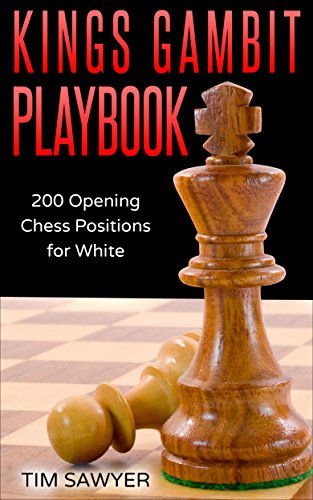 This Kings Gambit Playbook is a step by step basic guide to your easy repertoire for White. The bold King’s Gambit has fascinated tactical chess players from every generation. Attack and win! You offer material in a gambit to gain big advantages against the normal moves of your opponent. A gambit increases the excitement and risk for both players. Your opponent will make more mistakes under pressure. This playbook provides guidance for White. This opening is well suited for players who like to attack. The notes have more moves than explanations due to the tactical nature of the positions. Play is sharp after 1.e4 e5 2.f4 exf4 3.Nf3. The author avoids some wild and complex lines in favor of variations that are sound in theory and easy to remember.

Gambits are seen in the sports world. Basketball defenders double team star players. Baseball fielders shift to one side of the diamond against pull hitters. Football linebackers blitz the quarterback. Hockey teams pull goalies. It works. This Playbook is a tool to help you easily prepare to play your opening. The 200 diagrams in this playbook cover the variations that you are most likely to face. It is White’s move in every diagram. The author gives one reasonable move for White in each position with analysis on what to expect from the position. Be prepared!