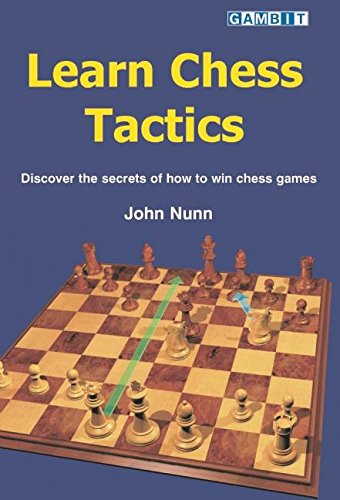 Once a chess-player has learnt the basic rules of the game, the next step is to study tactics. A knowledge of tactics will enable a novice to start winning games by giving checkmate or taking his opponent’s pieces. As the player progresses, his tactical arsenal will broaden and he will start to play sacrifices and combinations. Improving your tactical ability is the most efficient way to win more games and gain confidence at the chessboard.

Given the fundamental importance of chess tactics, there are surprisingly few books that teach the subject in a systematic way. Consequently, many players suffer from tactical blind-spots that plague them throughout their career. The step-by-step approach used in this book ensures that each concept is explained and tested before the next one is introduced.

John Nunn is a renowned grandmaster noted for his devastating tactical ability. In this book, he guides the reader to an understanding of key tactical ideas such as the fork, pin, and discovered attack, and discusses general ideas such as elimination and compulsion. No prior knowledge is assumed apart from the basic rules of chess.

Throughout the book there are carefully graded exercises to test the reader’s understanding.

Dr John Nunn is a grandmaster from England. He has won four individual gold medals and three team silver medals at Chess Olympiads. In the Chess World Cup of 1988/9, he finished sixth overall, ahead of several former World Champions. He is arguably the most highly acclaimed chess writer in the world, with three of his books receiving the prestigious British Chess Federation Book of the Year Award.

Be the first to review “Learn Chess Tactics” Cancel reply