Added to wishlistRemoved from wishlist 0
Add to compare
£3.99 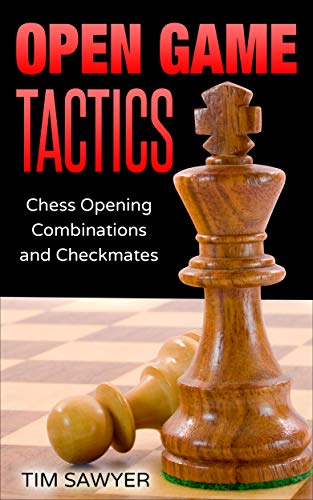 Open Game Tactics gives you 500 positions from actual games that use combinations and checkmates in the opening.
If you’re good at tactics, you’re good at chess. Opening theory may help you start well. Endgame knowledge may help you finish well. Tactical skill helps you win games and avoid losses.
Open Game chess games begin 1.e4 e5. This book covers the Petroff, Italian Game, Kings Gambit, Philidor Defence, Bishops Opening, Vienna Game, Two Knights Defence, Scotch Game, Evans Gambit, Max Lange Attack, Four Knights Game, Latvian Gambit, Elephant Gambit, Danish Gambit, Center Game, and Damiano Defence.
The Open Game teaches you to fight for a win. It best resembles hand to hand combat in chess. Attacks come quickly. This book shows winning positions played by masters throughout chess history with dozens of games included that played in 2020.
Tactics include pins, forks, removing the defender, attacking two pieces at the same time, and threatening to mate your opponent.
The easiest path to tactical success is to recognize patterns that occur frequently in your favorite chess openings.
Everyone knows a few positions. Here’s 500 in the Open Games.
This Open Game Tactics book does not include the Ruy Lopez. That has its own 500 positions in a separate book (see my Ruy Lopez Tactics book).
Tactical knowledge helps you to improve your winning chances. Take your opponent’s pieces. Pick off the pawns. Mate the king!
To advance in chess, you need more than dumb luck. You need tactics.
The purpose of this book is to illustrate and teach Open Game tactics. I assume you can read algebraic chess notation. The White pieces are positioned at the bottom of each diagram.
Above each diagram note who can move and win. It’s either White to play a tactical move or Black to play a tactical move.
Some moves are simple and easy. Others are subtle and tricky. That’s chess – lots of obvious moves and lots of sneaky moves.
Look at each diagram. It’s a key position ready for a tactical win. The final moves are in bold with a brief analysis or comment. Chess engines were used to ensure the accuracy of the analysis.
Follow the moves in your mind. The skill to visualize each new position without moving pieces improves your tactical strength.
Games are arranged by ECO (Encyclopedia of Chess Openings) coding (C20 to C59) from less popular to more popular moves.
All the World Champions played the Open Games at some point.
It’s a good opening for winners. Are you ready to win?
Buy Open Game Tactics, pick up your e-pawn, and go win!