How to Reassess Your Chess: Chess Mastery Through Imbalances

Added to wishlistRemoved from wishlist 0
Add to compare
£9.97 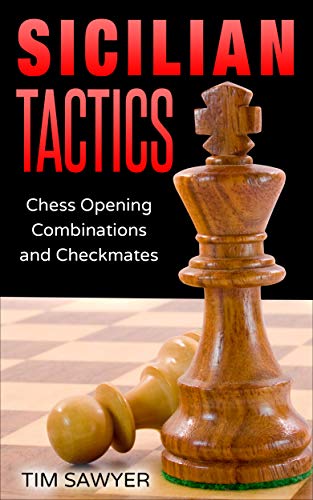 Sicilian Tactics gives you 500 positions from actual games that use combinations and checkmates in this most popular opening.
If you’re good at tactics, you’re good at chess. Opening theory may help you start well. Endgame knowledge may help you finish well. Tactical skill helps you win games and avoid losses.
Sicilian Defence chess games begin 1.e4 c5. This book covers such variations Smith-Morra Gambit, Alapin Sicilian, Grand Prix, Closed Nc3, Rossolimo, Open Sicilian, Kalashnikov, Sveshnikov, Accelerated Dragon, Taimanov, Kan, Moscow, Richter Rauzer, Dragon Sicilian, Scheveningen, English Attack, Keres Attack, Classical Be2, Sozin, Velimirovic, and Najdorf Sicilian Defence.
The Sicilian teaches you to fight for a win from an unbalanced pawn structure. When you run toward tactics, you run toward success. Tactics help you to attack and defend accurately. This book shows winning positions played by masters throughout chess history with dozens of games that were played in 2020.
If you’re good at tactics, you’re good at chess. Opening theory may help you start well. Endgame knowledge may help you finish well. Tactical skill helps you win games and avoid losses.
Tactics include pins, forks, removing the defender, attacking two pieces at the same time, and threatening to mate your opponent.
The easiest path to tactical success is to recognize patterns that occur frequently in your favorite chess openings. Grandmasters know tactics and can easily slide from one opening to another. Everyone knows a few positions. Here’s 500 in the Sicilian.
Tactical knowledge helps you to improve your winning chances. Take your opponent’s pieces. Pick off the pawns. Mate the king!
Don’t rely on dumb luck. How can “dumb luck” allow you to win? You can win a few games when your opponent makes dumb moves. That’s when your opponent gives up a piece for nothing. You’re lucky when your opponent fails to defend a mate in one. To advance, you need more than dumb luck. You need tactics.
The purpose of this book is to illustrate and teach the Sicilian Tactics. I assume you can read algebraic chess notation. The White pieces are positioned at the bottom of each diagram.
Above each diagram note who can move and win. It’s either White to play a tactical move or Black to play a tactical move.
Some moves are simple and easy. Others are subtle and tricky. That’s chess – lots of obvious moves and lots of sneaky moves.
Look at each diagram. It’s a key position ready for a tactical win. The final moves are in bold with a brief analysis or comment. Chess engines were used to ensure the accuracy of analysis.
Follow the moves in your mind. The skill to visualize each new position without moving pieces improves your tactical strength.
Sicilian Defence allows you to develop rapidly and open lines of attack against your opponent’s pieces and king. This book helps you discover strong moves after 1.e4 c5 with a brief comment.
White has many reliable strategies for quick attacks. In the ideal situation, players activate a new piece every move. White often plays 2.Nf3 followed by 3.d4 cxd4 4.Nxd4 for an Open Sicilian.
Black avoids drawish positions, maintains flexibility, and plans for a sudden counter attacks at any moment. Players may sacrifice a pawn, a piece, or the Exchange to speed up the attack.
Games are arranged by ECO (Encyclopedia of Chess Openings) coding (B20 to B99) from less popular to more popular moves.
ECO update their 500 codes. A few variations moved from one code to another to account for changes in popularity. I tried to be consistent with my Chess Training Repertoire Moves 4 book.
Ideas in this book come from the Sicilian Defence, but take note: These same tactical patterns work in other chess openings too. World champions will play the Sicilian Defence from both sides.
It’s a good opening for winners. Are you ready to win?
Buy Sicilian Tactics and go for the win!