Added to wishlistRemoved from wishlist 0
Add to compare
£5.99 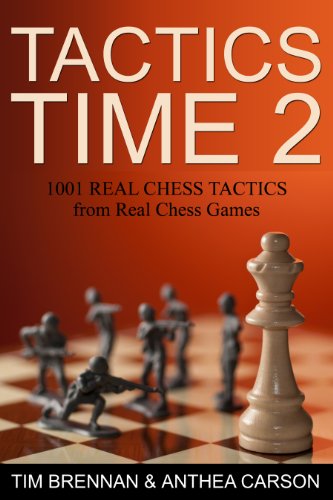 Important: Your everyday chess game might be good, but it could probably be much better by following some straight forward advice!

If you have not heard of Tim and Anthea you are missing out on some expert chess mentoring and advice, as their first book Tactics Time! 1001 Chess Tactics from the Games of Everyday Chess Players assisted 1000s of chess players like you and I around the world with improving their chess game significantly.

Now Tim and Anthea are back, this time with their new book: Tactics Time 2: 1001 Real Chess Tactics from Real Chess Games. More every day and real chess game problems every chess player should study and practice to improve their chess game almost right away!

Let’s do a quick quiz:

If you answered at least two of the above questions with yes, then it is time to allow Tim and Anthea to become your chess problem solving mentors.

They will help you to rapidly improve your chess game by letting you study specially designed chess tactics that come out of real chess games like you and I play.

Forget those composed chess problems and overly complicated analysis from Grandmaster games, as those positions almost never occur in everyday player games. What you need is to study chess problems that have a much larger impact on the quality of your game.

That is what this book offers:

Learn to easily spot various tactical shots and relatively simple, common patterns like a knight fork, an overloaded piece, and a weak back rank: doing so will definitely get you to win a lot more games, and even help you win some tournaments as well!

If you are ready…

… then the time has come for you to start working on the chess problems Tim and Anthea have presented in Tactics Time 2: 1001 Real Chess Tactics From Real Chess Games.

Why wait? Purchase this book today to significantly start increasing the quality of your chess games. You have nothing more to lose, right?