Added to wishlistRemoved from wishlist 0
Add to compare
£11.99 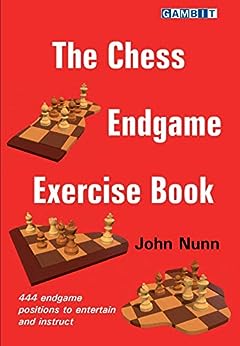 Everyone knows they should work on their endgame play. So many hard-earned advantages are squandered in ‘simple’ endings… But it’s tough finding a way to study endings that doesn’t send you to sleep and that helps you actually remember and apply what you have learnt.

“While endgame theory books are helpful, active participation by the reader is a great aid to learning. I hope that this book of endgame exercises will encourage readers to put their brains in high gear, both to test themselves and to learn more about the endgame. I have spent several months selecting the 444 exercises in this book from what was initially a much larger collection.” – John Nunn

All major types of endgame are covered, together with a wide-ranging chapter on endgame tactics. Examples are drawn from recent practice or from little-known studies. The emphasis is on understanding and applying endgame principles and rules of thumb. You will learn by experience, but always backed up by Nunn’s expert guidance to ensure that the lessons you take away from the book are correct and useful.

Dr John Nunn is one of the best-respected figures in world chess. He was among the world’s leading grandmasters for nearly twenty years and won four gold medals at chess Olympiads. In 2004, 2007 and 2010, Nunn was crowned World Chess Solving Champion, ahead of many former champions. In 2011, his two-volume work Nunn’s Chess Endings won the English Chess Federation Book of the Year Award, and was highly praised by Levon Aronian (who read both books cover to cover!) when making the award presentation.