How to Reassess Your Chess: Chess Mastery Through Imbalances

Added to wishlistRemoved from wishlist 1
Add to compare
£10.99 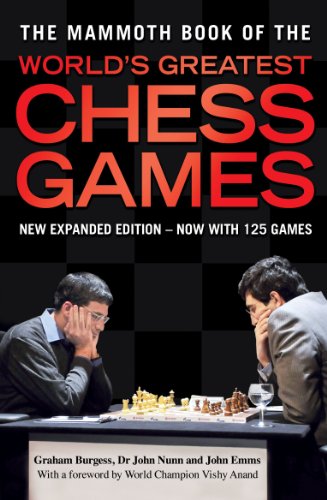 Improve your chess by studying the greatest games of all time, from Adolf Anderssen's 'Immortal Game' to Anand versus Kramnik 2008, and featuring a foreword by World Champion Vishy Anand.

The 125 greatest chess games of all time, selected, analysed, re-evaluated and explained by a team of British experts and illustrated with over 1,000 chess diagrams. Join the authors in studying these games, the cream of two centuries of international chess, and develop your own chess-playing skills – whatever your current standard. Instructive points at the end of each game highlight the lessons to be learned.

First published in 1998, a second edition of The Mammoth Book of the World's Greatest Chess Games in 2004 included an additional 12 games. This edition includes a further 13 games as well as some significant revisions to the analysis and information regarding other games in earlier editions of the book, facilitated by the use of a variety of chess software.

Be the first to review “The Mammoth Book of the World’s Greatest Chess Games: New edn (Mammoth Books)” Cancel reply